Yvoni was a hamadryad that lived in the forest near the City of El.

A nymph of the trees, this gentle young woman is scared by something... But what?[1]

Yvoni had a slender build. Her skin was a beige color with gray tree-rings dotting her shoulders, limbs, and neck. Her hair was made of yellowish-green leaves that went down to her waist. Her eyes and eyebrows were moss green. Yellowish-green to dark green leaves ran from her hips to her chest. Greenish-brown roots wrapped around her torso, legs, and left shoulder. Small pinkish-white flowers adorned her hairline, right middle finder and the roots on her leg. Small light green leaves sprouted from her left shoulder and right ankle.

Yvoni's skin was a beige color with dark gray, bruise-like marks on her limbs. Some of the tree-rings on her skin had a blood-red color in them. Her hair, hands, and feet were jagged, gnarled roots. Her eyes had light green irises with dark green sclera. She had a permanent smile and her teeth were pointed. A blood-red marking formed from the bottom of her mouth to the end of her neck. Gnarled roots covered her chest, part of her torso, and crotch. More jagged roots wrapped her legs. 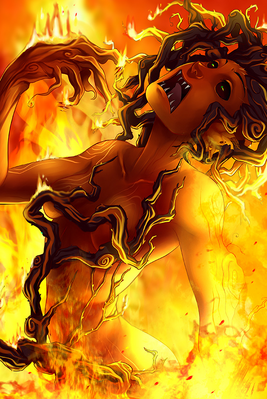 Retrieved from "https://eldarya.fandom.com/wiki/Yvoni?oldid=19111"
Community content is available under CC-BY-SA unless otherwise noted.