Xylvra is a Companion that was available during the Christmas 2017 Event.

In the wild, the Xylvra can't stand to live alone and often forms a pack with others of its kind. The alpha is then elected by the power of their purr. 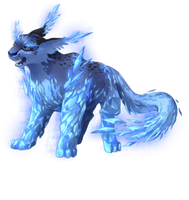 Retrieved from "https://eldarya.fandom.com/wiki/Xylvra?oldid=23346"
Community content is available under CC-BY-SA unless otherwise noted.