Valkyon is the leader of the Obsidian Guard and one possible date for Guardian in the game.

Solid, strapping and measuring 6 feet and 2 inches tall, this boy, with a difficult past, isn't very talkative. He is a tranquil force with a tender heart, especially when it comes to Floppy, his dear little Musarose Companion, whom he cares more than anything.

His parents died when he was very young. He had elder brother name Lance with whom he came to Guard. After Lance's death he started to get introverted.

Valkyon has shoulder length white hair and has golden eyes. From all of three leaders he is the most looking like human. He is very muscular (we can see that on his arms and stomach). He has lots of scars around his body which possibly means that he has been in a many fights. One of scars (the one on his neck) was made by his ex girlfriend - he said that it wasn't pleasant. He usually wears white armor with gold accents and the addition of warm fur. He also wears black forearm protectors. Rest of his suit is black and grey with gold details.

Leader of the Obsidian Guard, Valkyon doesn't talk much and only gives his opinion when he thinks it can help. This makes certain people quite uneasy when they try to talk to him. He remains a tranquil force with a warm heart.

Depending on the choices the player makes, she and Valkyon can be anything between dating couple and hating each others (although the story always goes the same way regardless of choices). If the player chooses all the positive options but is not dating him, she and Valkyon are very close friends.

They are his friends. They must get along well because they are leaders of the guards.

Valkyon experience his brother's death very much. Miiko told us that they were very close, and she is sure that if Lance had lived, he would never leave him.

They get along very well. Ykhar has a weakness for him.

They are friends. She helped him with looking for his companion (episode 7)

In episode 13 we've found out that Valkyon asked Cryllis to do some protection amulets.

In episodes 11 and 16 we can see that Huang Hua is quite interested in Valkyon. He thinks that she's a beautiful woman. 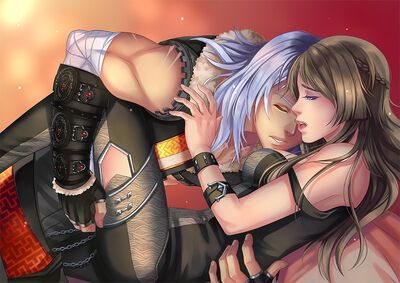 Retrieved from "https://eldarya.fandom.com/wiki/Valkyon?oldid=22882"
Community content is available under CC-BY-SA unless otherwise noted.