Very down to earth, the Panalulu is a "house" companion. Like the Liclion, it's more affectionate in its adult form, especially when it can eat its favorite pearly insects.

They eat Iridescent Beetles. They do not have a bait. 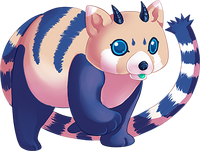 Retrieved from "https://eldarya.fandom.com/wiki/Panalulu?oldid=22086"
Community content is available under CC-BY-SA unless otherwise noted.