Nevra leads the Shadow Guard. He has quite the ego and enjoys the company of girls. He is one of the few members of the guard that takes the "ranking" to heart, and tries to keep his guard at the top of the list every month.

In episode 14 we've learned, that his companion may have a connection with his eye band.

In episode 15 Karenn told us, that their parents are still alive.

Nevra has raven black hair and lavender eyes. He wears an eyepatch over his left eye because Shaitan pierced it. His ears are pointy. He has a wide mouth and often smiles. He has a slim build. He wears a black suit with purple and red details, a white sleeve and black boots.

If vampires are known flirts, Nevra is no exception to this rule. Known in the Guard of El for his multiple conquests (especially in Absynthe Guard), he still makes an understanding and considerate leader. He always listens to Valkyon's orders.

They are his friends. They must get along well because they are leaders of the guards.

Karenn is Nevra's sister. They get along very well, but Karenn sometimes uses it to her advantage. 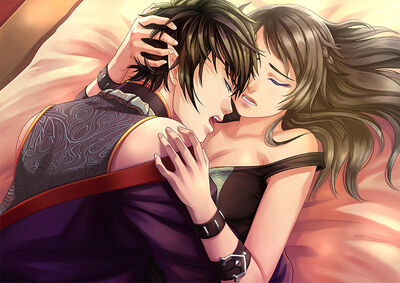 Retrieved from "https://eldarya.fandom.com/wiki/Nevra?oldid=21024"
Community content is available under CC-BY-SA unless otherwise noted.