Mini-Games are extra games that can be played in order to earn Maana, Experience Points or items. 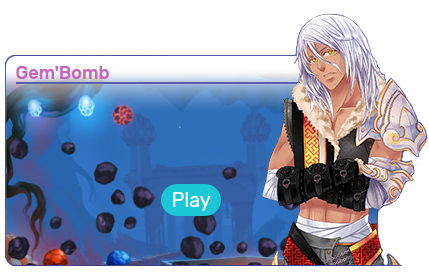 Gem'Bomb is a Mini-Game that can be played once every six hours in order to receive extra maana and EXP.

Players are given eight lava bombs in order to shoot them towards a wall of rocks. Scattered throughout these rocks are ten gems. The objective of the game is to dislodge the gems with the lava bombs and make them fall beneath the screen. Each fallen gem gives one Maana and two EXP.

The game's preview screen presents Valkyon on the right side of it.

Bubbl'Temple is a mini-game that can be played once every six hours in order to recieve extra maana and EXP. 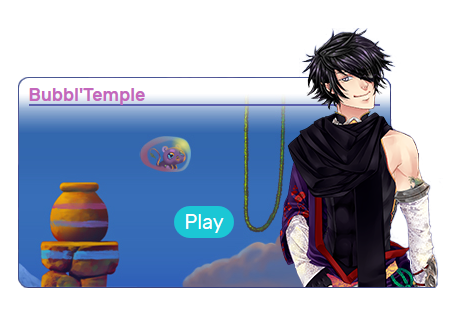 Players have to maneuver a trapped Becola through a series of randomly generated obstacles. Pressing the left-side of the computer mouse will move the Becola up while releasing will make the Becola fall. How far into the obstacle course the Becola ends up determines how many Maana and EXP the player will receive.

There is no limit how far can Becola travel but maana and EXP stops stacking at 195 feet traveling distance, with maximum of 10 maana and 20 EXP.

Nevra is presented in the game's preview screen.

Egg'Pick is a mini-game that can be played once every six hours in order to receive extra maana and EXP. 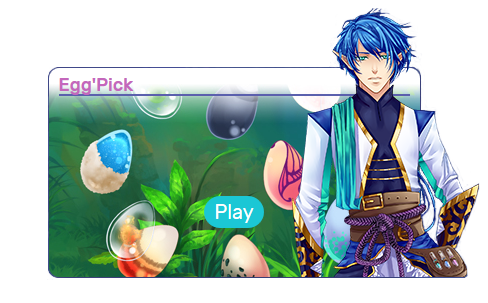 Players are given 30 seconds to click on as many Companion eggs that match the model one given in the upper left-hand corner. The total amount of eggs is 20 per round. How many eggs they clicked on before the timer runs out determines how many Maana and EXP the player will receive.

Hint: It is better let egg disappear than risk clicking wrong one.

These eggs can appear during the game.
Click the egg to go to the companion's page.

Purro'Swap (main article) is a game where players can exchange exploration items for a bindle.

Egg'Bomb (main article) was a multi-player game that was available for a short period of time. Players could choose between a training match or bet between 50, 100, or 200 Maana. After confirming their choice, players had to wait until three other players joined their game. The game itself is not dissimilar to the game "Old Maid".

Retrieved from "https://eldarya.fandom.com/wiki/Mini-Games?oldid=23629"
Community content is available under CC-BY-SA unless otherwise noted.