Lovigis is a Companion that was available during the Valentine's Day 2017 Event.

A symbol of pure and eternal love, Lovigis are - just like chimeras - impossible to leave. You just have to look at them to feel loved.

They eat Love Candies. They cannot be captured in the wild. 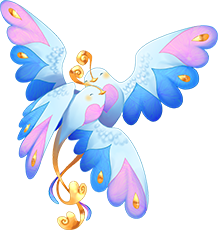 Retrieved from "https://eldarya.fandom.com/wiki/Lovigis?oldid=22068"
Community content is available under CC-BY-SA unless otherwise noted.