Leiftan takes care of the Guard of El alongside Miiko. A very good listener, he almost never gets upset and avoids passing judgment on others. Due to his important role in the guard, he isn't seen very often.

He has blond and black hair, which goes into two braids at the front of his face. He has green eyes. He is in very well shape and reveals his abs. He wears white outfit with some green and black details.

His Daemon look is demonish and black-winged and -eyed angel with black horns. He is seen with white wings couple of times when touching Erika (for example in Episode 26 Illustration).

Leiftan was little secretive and mysterious at first, talking little and mostly only when asked. He is Miiko's right hand leading the El Guard with her and well respected across the whole Guard.

His personality is calm, empathetic and helpful. He liked Erika immediately when he first saw her unlike other members of the Guard. In Episode 17 he was revealed to be a Daemon, the enemy what the Guard was looking searching and in co-operative relationship with Ashkore, an another Guard's enemy.

He was revealed actually to be ruthless, cruel, sadistic and manipulative person who's calm and kind personality was only a sham, alongside his fake race (lorialet) too. He is seen to be able to kill his associates cold bloodedly when he murdered Ykhar in order to prevent her to speak his plans to others. He also tried to kill Chrome. He is in love with Erika but that love is somewhat obsessive since he only wants her but doesn't think twice when murdering people close to her.

In Episode 28 when the Guard found out that he was a Daemon, he got captured. He was interrogated and seemed sad, trying to help guard with giving essential info about Lance's and his plans but suffered immense pain due to pact that the two made: he couldn't reveal any information about their plans or Lance itself without suffering. He willingly did so in the end and presumably died because of it. The pact was broken and when Erika caught one of his black feathers, it turned white.

Leiftan liked Erika immediately when he first saw her. He even liked her so much that he indirectly gave her a crystal shard; he gave it to Mery whom he asked to deliver to her. It was meant to be their secret but Mery told Erika in purgatory just after he died permanently in Episode 25. Reason for Leiftan to give shard to her was he liked her and wanted the Guard to trust her more.

He eventually falls in love with her regardless is the player on his route or not. This love, however, is somewhat obsessive and sick since Leiftan murders her friends while securing his own plans. He also dreams of recreating daemons as a race; a race, that both of them represent. He doesn't want her to die and even sacrifices half of his own life energy to save her.

Lance and Leiftan were in co-operative relationship but didn't seem to like each others. 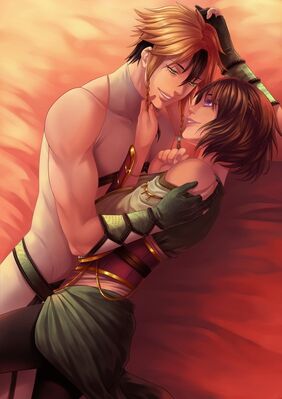 Retrieved from "https://eldarya.fandom.com/wiki/Leiftan?oldid=23828"
Community content is available under CC-BY-SA unless otherwise noted.