The Jade Coast is several days by boat from the City of El, and is the home of the Kappas. Guardian first visits this place in Episode 6, when she goes on a mission with Chrome to bring Elliot back home.

This region is available for exploration after Episode 7. 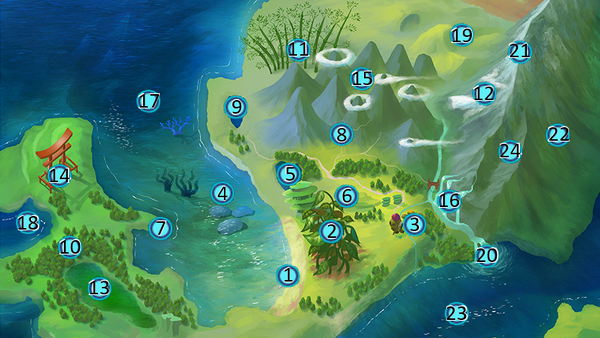 This lower beach is an isolated area where many Kappas go to play in the water.

A path inside the Big Leaf Forest. Strange plants can be found here.

Sea near Frog Reef, including Big Leaf Path, Kappa Beach and the mountains at the distance.

The local songs say that the turtles around the corner are very humorous.

A place where the ruins from the first established civilization still stand. A pious calm can still be felt.

Coastal area, but also a meeting place for young Kappas. They come to swim and often forget their things.

Steep slow leading to the tip of the hills.

A small lake where frogs can come lay their eggs in safety.

A forest that surrounds the lake. They say a pirate hid his treasure there that included many pieces of precious stones.

A forest filled with the biggest bamboos in all of Eldarya!

The flank most exposed to the mountain's sunlight. You can often find Kappas who decided to rub themselves with the eternal snow.

A lake that gets its color from the algae that line its bottom.

Huge gate built in the old days, it collects the memories of those passing through it.

The slopes are so steep that someone has yet to reach the top of these sharp peaks.

Huge cascades which are thrown into the river of Amphea.

A sea that gets its name from the first woman that got trampled by its heave.

A big bay that's animated at night by the sounds of the croaking of the toads that live there.

Remote lands that serve as a separation between the green flora of the Jade lands and the tundra of the surrounding areas.

Small waterfalls that plunge into the Ocean. The water's turquoise color is due to the faery plankton that seek refuge in this fresh water current.

At the top of the mountain, there are rare flowers and eternal snow.

The rocks that make up this side of the mountain have a peculiarity of being able to absorb a big part of the light, hence where it gets its name of "dark flank".

A still river that passes through the Jade lands, who's source is at the foot of many mountains. The water is crystal clear.

Under the waves
Retrieved from "https://eldarya.fandom.com/wiki/Jade_Coast?oldid=23939"
Community content is available under CC-BY-SA unless otherwise noted.