Hydracarys is a Companion that was available during the Halloween 2017 Event.

Like the Lerne Hydra, when one of its heads is cut off, two grow back in its place. But we don't recommend you risk it... Companions are sacred creatures, remember!

They eat Candy Corn. They can be captured in the wild using the Red Gem. 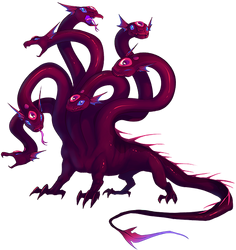