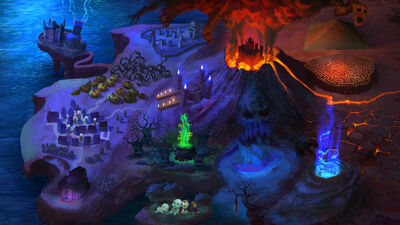 Halloween Land is a location first presented in Halloween 2016 Event. Since then it's always been a part of the Halloween Events, mostly via exploration or occasionally backgrounds.

In Halloween 2019 Event it was first presented as a part of the Event's story.

During this event Erika with her companions travels to Halloween land to rescue Miiko. They encounter some problems on the way, such as malicious witch and Damneds. 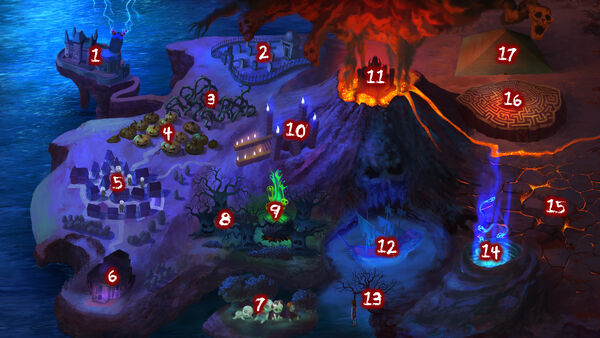 This is a mad scientist's manner. Some have heard screams coming from the basement when there is a full moon.

Cannibals, ghouls, and other flesh eating creatures can be found here.

A specialty of a grand high witch, supposedly the thorns only obey her commands... She hasn't been seen for centuries.

Admire the parade of "Jack's" children. They will watch each step you take, but don't listen to their advice if you want to live...

Half-dead, the men and women of this village are only empty shells without souls.

Formerly known and quite grand, it's now just a remnant of an earthly opera that was destroyed by flames.

An isolated island in the southern region, it's inhabited by possessed dolls.

A strange forest where the trees are alive. Not all are evil, but take care not to get caught in their branches.

Hate filters, resurrection and transformation potions, this cauldron of a thousand horrors has held many mixtures.

This is the altar that leads to the gates of Hell and the more ferocious of demons.

Come put your life at risk and affront the King Phoenix. The strength of your courage will determine the valor of your prize.

Galleon pirate ship who terrorized the seas on earth for centuries, it has inspired many legends such as the Flying Dutchman.

Rumor has it that a man lost the love of his life. With no more reason to live, he hung himself to be reunited with his one true love.

A well where the deceased companion souls rest...

Watch out! It's hot!

The legendary work of Daedalus, this labyrinth is connected to the one that once locked away the Minotaur. It collects the souls of those who have perished there.

The evil tomb of a pharaoh that has been forgotten for a long time. It contains many unknown treasures for those who can come out... Alive.

Encounter in Village of the Damned

Fight at the Demonic Altar

Miiko being rescued in Haunted Forest