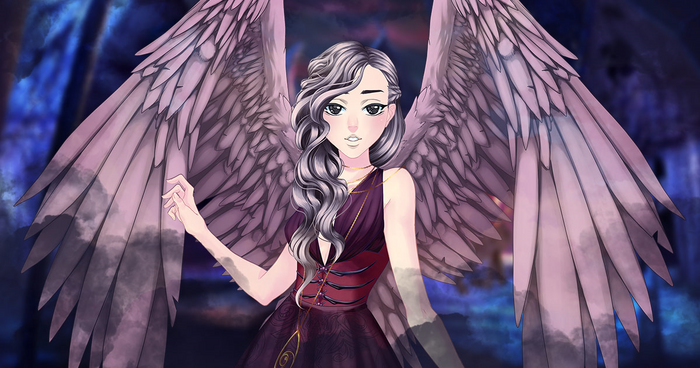 Halloween has returned on Eldarya!
From 10/23 at 11am until 11/03 at 11:59pm, cross the Disenchanted Forest, enter the Village of the Damned and free Miiko from the claws of a witch drunk on power... Will you have the courage to adventure through these horrifying lands?

This years Halloween event differs from past Halloween events because it's based on story instead of just map exploration. The story takes place in Halloween map locations and backgrounds. The Event contains daily missions (which means part of the story) with outfit and illustration pieces as a gift and also exploration with companion. The Event goes by name "The Demonic Mission".

Miiko has been kidnapped right in before Valkyon's eyes and in order to save her he, Erika, Nevra, Ezarel and Leiftan have to go through the Halloween land and its horrors. They get to Pumpkin Alley where they discuss about their mission and Village of the Damned where Miiko is kept. Soon after they encounter Rawist who attacks them. The group escapes and lands on mysterious dark valley where they meet an old woman (Furie) who tells them to go to the Disenchanted Forest saying that's the real place where Miiko is kept. She also says that Miiko's kidnapped witch is named Cornelia and she wants to use her as an living sacrifice in order to bring back to life an horrendous extinct companion Greifmar. The group is suspicious whether to trust this woman or not but are finally forced to go to Forest since Valkyon starts to go there by himself alone.

In the Forest the group unsuccesfully seek for Miiko until the whispers of trees distracts Erika long enough for one tree to grab her with its roots. With help of her friends she is freed and the group decides to abandon the Forest and go there where they were originally going: Village of the Damned.

Miiko however isn't nowhere to be found from the Village either. The group encounters few Damneds - zombie like creatures which were originally elves, lorialets and other different races from living Eldarya world but were banished to Halloween land because of their ritual to sacrifice half of their own people for own benefits. Furie comes to the group and says that two of them must remain to battle against Damneds and others must leave and go to Demonic Altar, a place where Cornelia is doing her necromancer ritual. Nevra and Leiftan stays behind to fight and others go to the Altar.

At the Altar Erika, Ezarel and Valkyon create a plan which don't go as it was meant to: Cornelia casts a charm on Valkyon and Ezarel and forces Erika to take a part in her ritual; she says that she needs a represent from each world: Erika represents the Earth, Miiko represents Eldarya and she herself represents the world of Dead. Only represent of Eldarya would die in the process since Greifmar, the companion trying to bring back to life, is also from Eldarya.

The ritual however takes Cornelia's all concentration so she accidentally lowers the charm what was holding Ezarel and Valkyon still. They interrupts the ritual which leaves Erika and Cornelia half-dead. Furie, however comes back again and says that Erika must immediately go back to the Disenchanted Forest and save Miiko: the tree that previously captured Erika is the passageway to the Nether world and it opens up only for the dead. Furie lends Erika her rawist - same creature that previously false attacked the group - and she rides to the Forest and saves Miiko just in time. She then collapses, later wakes up at Eldarya's infirmary and hears that everybody survived - including the Greifmar which was succesfully brought back to life regardless of interrupted ritual. 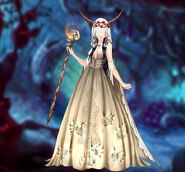 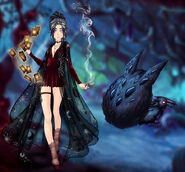 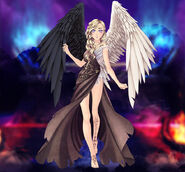 The event introduces couple of new outfits: The Necromancer outfit (available through missions), Fortune Teller outfit (found by exploration) and Fallen Aengel outfit (by making purchase from the Bank). 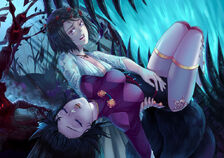 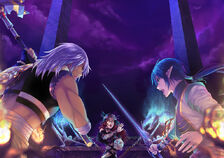 Fight at the Altar 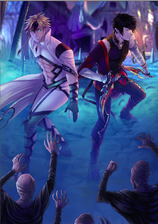 Fight at the Village