Fenrisulfr is a Companion that first appeared in Episode 17 and is one of the Dark Companions. Fenrisulfr was made possible to catch at March 2020 and was given bait and food.

Episode 17's Fenrisulfr belonged to Naytili and beared the name Moloch. She controlled her companion with the help of demons.

Considered one of the rarest pets, his passion and rage is matched only by his devotion when he finally finds the perfect master. 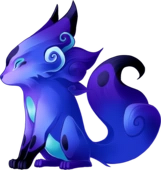 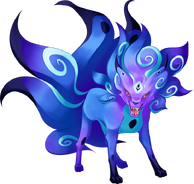