Ezarel is, at first impression, a polite and calm elf. He leads the Absynthe Guard. He is an alchemy master, and he uses his knowledge often on the others. Quite the sweet tooth, you can try to win him over with honey or other sweets, even if it doesn't always work.

Ezarel has long, blue hair, tied in a low ponytail. He has green eyes and pointy ears. His outfit consists of a navy blue top with a Chinese collar under a waistcoat. He has white trousers, he also wears a large leather belt with two golden buckles.

Ezarel doesn't listen to anything besides the sweet sound of a well placed joke. Proud of what he is and what he does, he can sometimes come off as condescending to people he doesn't know. Get in his good graces and he will be a trustworthy friend. 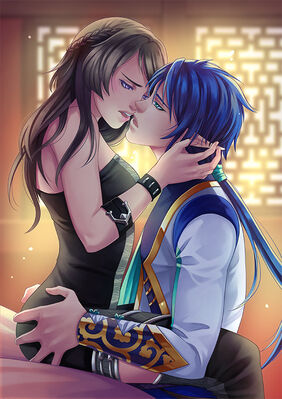 Retrieved from "https://eldarya.fandom.com/wiki/Ezarel?oldid=19885"
Community content is available under CC-BY-SA unless otherwise noted.