Specific events will push Miiko and the other members of the guard to question your human nature.
Help the Guard of El to prove that you are indeed a human so you can finally return home!

In the Crystal Room, Guardian timidly tries to tell Miiko about the piece of the Crystal that she "found". However, Miiko's intimidating air and curt replies make it difficult for Guardian. Glancing at Ezarel, Nevra, and Valkyon, she hopes that one of them will intervene. When no one does, Guardian goes ahead and shows Miiko the shard anyway.

Puzzled at first, Miiko quickly recognizes the shard for what it is and speaks to Jamon, though Guardian does not understand what she says. Looking back at Guardian, she asks her how she got that piece. Guardian attempts to play it off like she found it, but she cannot think up a location when asked where. Instead, she tells the truth: Mery was the one who found it then gave it to her. The thought was that, if she said she found it, they might hold her in higher esteem.

This explanation prompts laughter from Ezarel and Nevra, who are still standing behind Guardian. Miiko ignores them and asks Guardian if she at least knows where Mery found the Crystal piece. Guardian admits that she did not ask, not realizing that that was important information.

Ezarel restates his comment about Guardian being useless, but Miiko tells him to quit his teasing. She and the boys exit the room to discuss Guardian's situation, leaving Guardian wondering what exactly that entails. Instead of staying in the Grand Crystal room, she covertly follows the group. Upon entering the Hall of Doors, she hears a small commotion coming from the Pantry. Pushing the door open a little, she sees Miiko, Jamon, and the Guard leaders having an argument.

This episode does not have any new outfits. 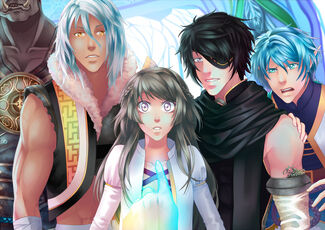 Apparition of the Oracle 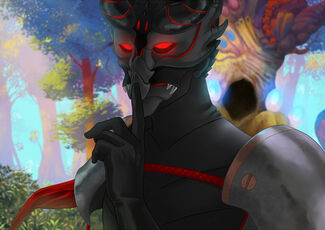 During this episode, you are able to unlock two memory illustrations:
one of them is mandatory and the other one can be missed.
You can have both of the illustrations in one try.

Previous journal entry:
Thanks to your little friend, Mery, you have found a new piece of the crystal that you take to Miiko. She doesn’t seem very happy to welcome you.

You’re now facing Miiko, she’s already exasperated to see you, but...
You have an important mission: to give her the piece of crystal that Mery gave you.
She quickly dismisses you, before isolating herself with the rest of the group to talk about “your case.”

♦ Spy on what the others have to say about you

You must go to the Hall of Doors.
Indeed, barely setting foot there, you hear the yelling of the Leader of the Guard and of her disciples.
You take all of it in and try to act, thanks to this you meet Leiftan.
The group and you decide to go to the Crystal Room, while they continue their discussion, the Oracle makes it’s appearance.
It’s a shock for everyone.
It’s then decided that you will take a test to determine if you’re a faelien (a half-faelien, half human) or just a human.
Ezarel is in charge of creating the potion.

♦ Find Ezarel and see if you can help him.

Follow him all the way to the Alchemy Lab

Attention!
From now on, your dialogue choices during this episode will have an impact on your relations with the different characters!

He gives you a list of ingredients to find, but you will first have to unlock several dialogues before obtaining a few of them. 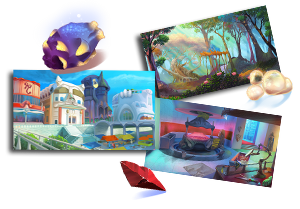 You will have to find all of these elements for Ezarel’s test.

Once you have the Lunar fruit and the Scarlet Stone, you will cross paths with Keroshane.
After talking with the young unicorn, he tells you where to find the Golden Cypress Sap: Go outside HQ!

♦ Follow Kero’s advice and go to the Cypress Clearing.'

Once you arrive at the Clearing, you hear a noise nearby. Curious, you decide to go see what’s going on.

♦ Go towards the left to find out what made that noise!

In the area where the noise came from, you see a circle of mushrooms: Maybe it’s a way for you to go home?
You try to step in the circle to go home and end up meeting Alajea and Ykhar, two young women from HQ that took you for an intruder.
They then decide to take you to see Miiko.
It’s slightly deja vu, right?

♦ Go back to see Miiko in the Crystal Room to clear up the misunderstanding.

Miiko briefly discusses the situation with the two young women, and you’re finally free to return to your mission: Find the Golden Cypress Sap!
Return to the depths of the forest.

When you arrive, a new noise is heard, and you decide for curiosity’s sake to go and have a look.
This time, you are face to face with the masked man who points out the area where another piece of the crystal is, before vanishing once again.
You take the piece of crystal and the Cypress Sap, and then head back to HQ to finish the potion.
When you arrive in front of Ezarel with all your ingredients in hand, he tells you that you’re missing one: a Changeling Eye.
Even though he didn’t write it down, you still accept to go find it, direction the library!

You go to the library to find a Changeling Eye, only there isn’t one.
When you go back to see Ezarel, you find out that it was just another joke.
After this, he tells you to let him concentrate while he finishes the preparation.

While waiting, you will have to talk to the other members of the guard.

Once you have talked to everyone, you can return to see Ezarel who will be done.
He will ask you one last favor.

Accompanied by the kitsune, you arrive in the room.
Everyone is already there ready to see the results of your test.
Without a doubt: you have faery blood in you.
The news is hard to swallow...

♦ Go get some air at the Central Pavilion.

When you arrive at the Pavilion, you see little Mery.
Yet you don’t stay long because either Kero or Ykhar quickly catches up to you to tell you to go back and see Miiko.
She has many things to tell you. 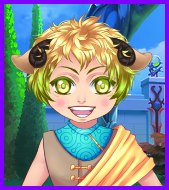 ♦ Go back to see Miiko in the Alchemy Lab.

You go back to see her with some apprehension.
The discussion about your situation continues and finally it’s decided that you should stay in Eldarya.
Miiko then gives you a room, like all members of the guard.

On the way, you cross paths with Ezarel with whom you will have a short conversation.
When you arrive in your room, you realize it’s less than inviting... There isn’t even a mattress!!

It’s on that note that this journal entry ends.
See you next time in Episode 5!

「(Ezarel was already there and had his nose buried in a grimoire.)」

「If you want my opinion, it could have happened during your tantrum.」

「Let me see your list. Ah! There's a scarlet rock.」

「We see them from time to time.」