A walk in the forest, a circle of mushrooms... And a blinding light.
Your entrance into a new world may reveal some surprises... Good and bad.

During a walk through her favorite forest, Guardian ruminates about where she is at in life; she is nearing the end of her studies and whole new chapter awaits at the finish line. The main reason she took this walk so she could have some time to herself, to take a few moments to forget about her worries.

Her thoughts are interrupted when she spots an odd species of mushrooms. When she gets closer, she notes that the mushrooms grew to form a perfect circle and that the grass within this circle looks fresher than the grass beneath her feet.

Placing a foot within the circle, she is instantly enveloped in a swarm of fireflies. A blindingly bright light engulfs her. Once the light goes away and her eyes adjust to normal lighting, she finds herself in a strange room. Alarmed by the drastic change, she surveys her new surroundings in an attempt to find an answer for this fantastic development.

As her eyes roam, they alight upon a giant blue crystal set in the center of the room. Entranced by its beauty, she walks to it, a hand outstretched. Before she can touch it, however, an angry voice demands to know who Guardian is and how she got in here, breaking her trance.

Startled, Guardian turns around to see a strange fox-eared and fox-tailed woman. The fox woman asks Guardian if she is a Templar or Freemason, to which Guardian blurts out that she does not know what either of those terms mean. Ignoring her, the fox woman demands Guardian to answer her as a trail of blue flames form between her hand and the staff she carries. As Guardian stares in amazement at this display, she stammers out an explanation about her walk in the forest.

A loud noise interrupts Guardian. The fox woman exasperatedly wonders aloud what is going on, to which Guardian retorts that she cannot answer that as she just got here. Ignoring Guardian once again, the fox woman reminds Jamon about what to do, electing to deal with Guardian later. As the fox woman hurries out of the room, an ogre-like creature moves in front of Guardian, blocking her view. Guardian quickly figures out that this must be Jamon.

Without any warning, Jamon grabs onto Guardian's wrist and drags her out of the room. Guardian tries to tell Jamon that he is hurting her to which Jamon gives a nonplussed grunt. She continues to struggle in his grasp, only stopping after feeling a sharp pain in her forearm.

With Guardian in tow, Jamon walks through several rooms before arriving at the top of massive circular staircase. Guardian asks where they are going, but Jamon just grunts again, even after she demands an answer. They continue down the stairwell, Guardians legs growing more and more exhausted as they descend.

Upon finally reaching the bottom, Jamon pushes Guardian into a dreary and damp cell, ordering her to stay put. Guardian tries to get Jamon to understand that she will not stay here, but he simply repeats his— and, apparently, Miiko's— order before leaving. Guardian cries for him to come back but her words fall on deaf ears.

The reality of her situation settles in: she is a prisoner in a strange world. She does not have enough time to process everything before an eerie shadow appears in the murky green water across from where she stands. The shadow similes at Guardian, making her back away in fright until she reaches the far end of her cell. Just as she wonders if she will become a snack, the shadow disappears into the water.

Trembling from her close call, Guardian lets herself fall onto the floor. Even though she desperately hopes that everything she has experienced is nothing but a nightmare, the pain in her arm does not let her forget that she is still awake. In a state of panic, Guardian's imagination starts to get the better of her. As it brings up a host of terrifying scenarios, she wonders what is going to happen to her.

This episode does not have any quest items. 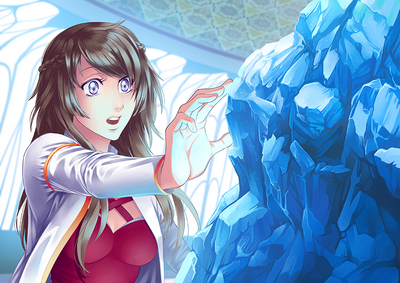 This first episode serves as an introduction to the story.
Exceptionally, there are no movements during this episode and you just have to "follow the dialogue".
You will learn more about your entrance into this magical world.

• CHAPTER I •
One last step on Earth

Life is full of surprises! You have decided to talk a peaceful walk in your favorite forest.

Although you know the forest well, this time, you notice a small circle of mushrooms you have never seen before. Strange...

You are blinded by a white light and you find yourself teleported to a room you have never seen before.

A Grand Crystal is kept in this room on a pedestal. You are suddenly, and inexplicably, drawn towards the crystal...

You snap out of your trance to find yourself being yelled at by a fox-like girl. She seems quite angry that you are in the room and yells at you. She is interrupted by a loud noise and then orders a sort of giant to put you in a prison cell.

This giant, named Jamon, takes you by force to the deepest caverns and throws you in a dark and gloomy cell.

This is where you finish the first episode of Eldarya!

That’s all for this journal entry!
See you for episode 2!

Retrieved from "https://eldarya.fandom.com/wiki/Episode_1_(Welcome_to_Eldarya)?oldid=20380"
Community content is available under CC-BY-SA unless otherwise noted.