Elliot is a young Kappa who is only a few months old. No one knows why or how he got to the General Headquarters.

Elliot has a hoof on the back and his skin has a light green tone with some stripes and circles in stronger tones. His eyes are dark green and his mouth is actually a beak, where his nostril is also. In its head there are "leaves" and an opening that holds the water that is vital for its survival. Elliot has no clothes, as we can see during the game.

Elliot has a calm and loving personality. He doesn't say much, his few words are summarized in "Hiiii!", The name of the Guardian and the name given by her. He appears to be sad when he is away from the Guardian, which can be seen when she says goodbye to Elliot at the end of Episode 6 (TO).

Elliot enjoys Guardian's company and often tries to get her attention. 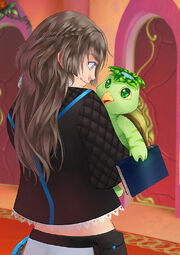