On March 30th, 2018, the main administrator of Eldarya opened a thread announcing when the Easter event will begin.[1] It detailed how players could obtain equipment items. The event ran from April 2nd to April 9th.

After clicking on the event tab, players were given a short scene with Miiko. She explains that the citizens of the City of El are participating in an event called the "Festival of Companions". Miiko thinks that they may have enough egg-shaped candles for the end of the Festival, but she is not entirely certain they will stay there. Apparently, creatures known as Meepers love to steal these candles. Miiko asks Guardian to help out with festival preparations and to make sure the Meepers do not swipe any candles.

Once having completed this scene, the screen changed to show Mery and Milo, with Mery asking Guardian to help with painting the eggs. Alajéa, Huang Hua, and Karenn are also helping, but they are not working fast enough. Within the dialogue box is a green "Play" button. Clicking the button would activate the egg-painting mini-game.

The egg-painting mini-game was a coloring-based game. Before the game begins, players could choose to either help Alajea, Huang Hua, or Karenn. After picking one of the girls, players were given two eggs: one white egg to color in on the right side of the screen and one model egg to copy on the left side of the screen. Underneath the white egg were a set of paints: pink, purple, blue, green, yellow, orange, and red. A green circular button with a white checkmark on it was placed on the right of the white egg. The objective of the game was to reproduce as many eggs as possible within 50 seconds. Each completed egg would earn the player one point to the gauge of the girl that they picked. Once the 50 seconds were up, players were automatically taken back to the event page. This game could be played three times for free before players were given access to the Meeper mini-game. If the player wanted to have access to the egg-painting game again within the same day, they had to pay 20 Gold Coins.

The Meeper mini-game was a stragety based game. Guardian had to chase down a Meeper and prevent it from entering a burrow buy throwing purple stink bombs at the correct time. If a Meeper entered a burrow, the game would end. If the player successfully caught the Meeper, one point would be added to each girl's gauge.

Alajea, Huang Hua, and Karenn had a total of 27 points to each of their gauges. Every three points, the player would be rewarded with an equipment piece. Once accepted, the other color variations for that piece would show up in the Clothes Shop. Points could be bought for 10 GCs each.

Players could see a blurred version of the event illustration and any pieces of it that they had found by clicking on the illustration button. Pieces could be found at any location on either the City of El or Jade Coast maps or bought for 10 GCs each. When all the illustration pieces were found or paid for, players had to click a button to reform the illustration. Once reformed, the picture was added to that player's illustration collection. There were eight pieces in total that could be collected.

The companion of the Easter was the Egg Thief himself-the Meeper. You get it when you get all the outfit parts and could fulfill three missions. After that, he would disappear for one last time. If we had been able to catch him again, he would be kept permanently.

For individual pieces of each outfit, see Easter 2018 Event/Outfit Pieces.
Each outfit consists of 9 parts. Whenever you have collected 3 points, a new outfit item has been added to the wardrobe.
In addition, the outfits of Easter 2017 could be purchased for gold, except for the outfit Spring Faery.

With a little luck, our companion sometimes brings along a part of his expedition. When all 8 parts are found, we get the event illustration. Alternatively, the image parts can also be purchased for every 10 gold pieces. 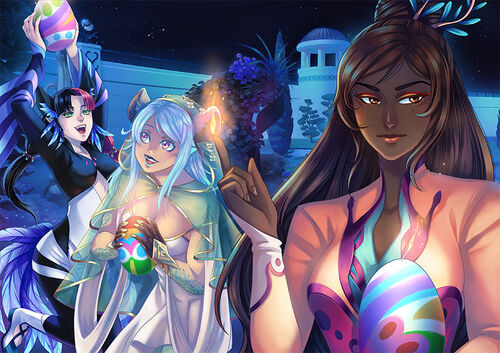