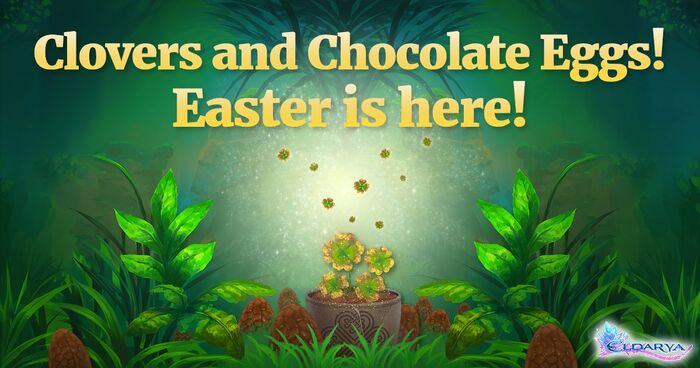 On April 14th, 2017, the main administrator of Eldarya opened a thread announcing the start of the Easter event.[1] It detailed how players could obtain equipment items. The event ran from April 14th to April 26th.

For every day of the event, players had to obtain four ingredients. Once they had gotten everything, the items would make three Fortuna Clovers. These clovers could be given to either Ykhar, Jamon, or Chrome. After giving a clover to one of them, a pop up would appear with an array of colors for a certain equipment piece. Once a player confirmed their choice, the character they picked would have a small bit of dialogue. The other colors of that piece would then become available in the Clothes Shop for either Maana or Gold Coins. Each character had a total of nine pieces. Fortuna Clovers could also be bought for 20 GCs.

Once Ykhar, Jamon, and Chrome rewards were completely unlocked, Mery would appear. In exchange for giving him 30 chocolate eggs, players could receive a Jeanylotte. Players had to send chocolate eggs to other players that were on their friends list. These eggs would then be scattered throughout the site and players had to find and click on them so that the eggs could be added to their inventory. The eggs could also be bought for 20 GCs each.

The event also had an exclusive bindle called the "Spring Feary Bindle". This bindle was available every day and the amount of items needed to obtain the bindle changed with each day. Inside the bindle was a solitary outfit with all of its available colors plus 50 Purro'Passes.

In the Clothes Shop, there were two outfits that were from the Easter 2016 event that was held on the French server. One outfit could be bought with Maana or Gold Coins while the other could only be purchased with GCs.

Pieces of the illustration could be found by exploring the City of El or Jade Coast map or be purchased with 10 GCs.

Once all the clothes were unlocked, Mery appeared. Mery became the 30 collected chocolate eggs[1]handed over, he gave us the fellow Jeanylotte.

For individual pieces of each outfit, see Easter 2017 Event/Outfit Pieces.
Each time Ykhar, Chrome or Jamon received a clover, a garment appeared where we could choose the color. If you wanted the garment in a different color, this had to be bought for Maana or gold in the shop. The items were only available in the shop if they were unlocked before.

At this event there was the exclusive Spring Faery Bundle. Every day this bundle was available at the mini-game Purro'Swap. From this bundle, we got either a piece of clothing for the outfit "Spring Faery" or 50 Purapässe. The bundle could either be opened immediately and we randomly got an item out of it, or we could resell it on the market.

To get all the parts of the picture, we had to send our companions on expeditions. With luck, he brought a piece of the event picture. Alternatively it was possible to buy a part of the picture for each 10 gold .

The picture shows Leiftan lying on a meadow surrounded by companion eggs. In the picture, the eggs are from the companions Jeanylotte, Sitourche and Lovigis. 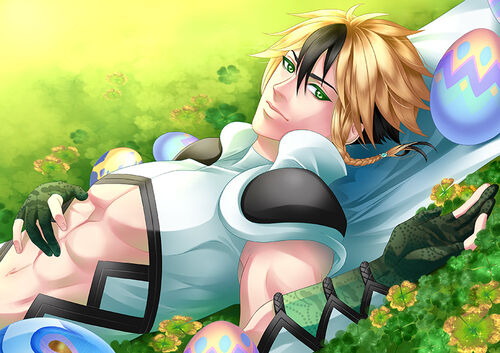 It's a Leif Easter 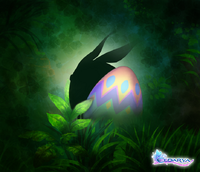