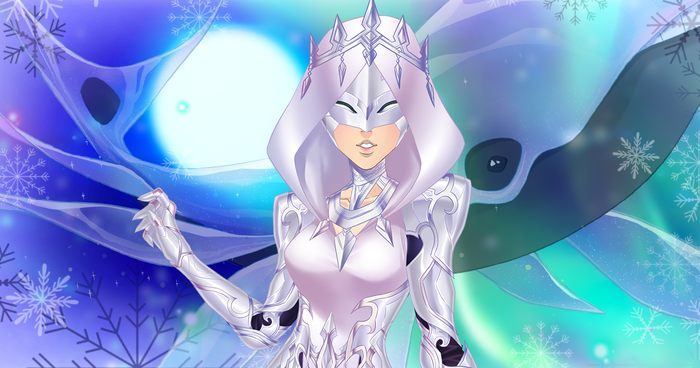 For individual pieces of each outfit, see Christmas 2018 Event/Exploration Items.

There were 2 new companions to find. The eggs and food and bait are also available in the shop.

Five new outfits as well as last year's items were found on expeditions on the Christmas map and also in the boutique. The outfit Holy Knight was only in the shop and the outfit Winter Warrior only on the map. The Christmas outfits of 2015 and 2016 were no longer available, except for the exclusive outfits.

Queen of the North Outfit

On the explorations one could also find picture fragments. Having gathered all eight pieces, it resulted in a picture of Gardienne with Jamon, Ykhar and Kero sledding that was automatically added as an illustration in the library when it's put together. The location of the image parts was arbitrary, there were no specific places where image parts were to be found. Alternatively it was possible to buy a part of the picture for each 10 gold. The picture found has the name "Sled Race".

Retrieved from "https://eldarya.fandom.com/wiki/Christmas_2018_Event?oldid=23639"
Community content is available under CC-BY-SA unless otherwise noted.