On December 16th, 2016 the main administrator of Eldarya opened a thread announcing the start of the Christmas event.[1] From December 16th, 2016 to January 3rd, 2017, players had access to a new exploration map. The map had twenty different locations for Companions to explore.

Companions could find either food, bait, an egg, equipment items, or an illustration piece. If a Companion came back without bringing any clothing items, a bar underneath the map— referred to as the "second chance bar"— would progress one step. The bar would continue to fill each time a Companion came back empty-handed. Once the bar reached fifteen, the player would receive a random equipment item, after which the gauge would revert back to zero. If a companion returned with an outfit piece before the bar filled up, the bar would reset to zero. All players automatically got an equipment item upon their first exploration.

Anything bought from either store could not be sold on the market while items found through exploration could be, not including the first equipment piece or any illustration pieces.

On the event page, players could see a blurred out version of the event illustration and any pieces of it that they had found. Pieces could be bought for 20 GCs. When all the illustration pieces were found or paid for, players had to click a button to reconstruct the illustration. Once reformed, the picture was added to that player's illustration collection. There were eight pieces in total that needed to be collected.

Numerous outfit parts, as well as the new companions including bait and food could be found on the map in 20 areas. 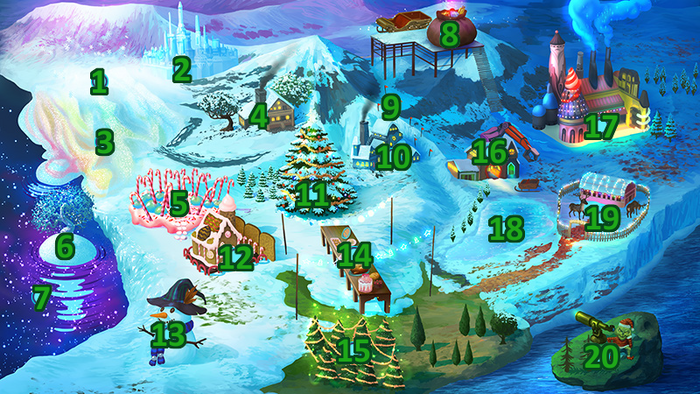 For a list of items found at these locations, see Christmas 2016 Event/Exploration Items.

This outfit could only be found through exploration.

These outfits were only available in the Clothes Shop and could only be bought with Gold Coins.

These are outfits that could be found through exploration or bought in the Clothes Shop for either Maana or Gold Coins.

To get all the parts of the picture, we had to send our companions on expeditions. With luck, he brought a piece of the event picture. Alternatively it was possible to buy a part of the picture for each 20 gold .

In the picture is Valkyon with his companion Floppy, both running through a blizzard with a tree on their shoulders.

Retrieved from "https://eldarya.fandom.com/wiki/Christmas_2016_Event?oldid=19774"
Community content is available under CC-BY-SA unless otherwise noted.