You've been warned... Even if it is cute, this companion isn't very useful and tires quickly... Don't insist and leave it in its egg, it's best for everyone.[1]

This Companion was automatically given to players in 2017 for a short time: it gave player a gift and disappeared after sending it for exploration. For the 2018 event, Blobby appeared again but players received a Blobby egg as a gift after sending Blobby on mission. In 2019 it came back again and brought Blobbette egg from the exploration.

Blobby's food is Blobbydelice ©. They do not have a bait.

Blobby's energy is 10. It takes ten minutes to hatch their egg.

During Summer 2019 Event Blobby is part of one mission: it could be evolved to Blobbiathan in Alchemy minigame. As a result, Blobby egg will disappear and is replaced by Blobbiathan egg. 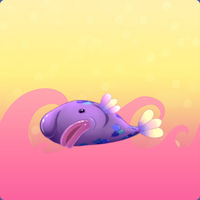 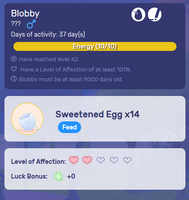